“If you two ever want photos as a couple, let me know.”

Airi – Like I said last week, this shoot has been something that I’ve been thinking about for a long time.  Part I with Airi happened a few days before Valentines Day, where I wanted to take a few shots of her at her apartment.  The idea was to see what it might look like if you’re texting a significant other behind the scenes.  To do that, I literally had Brian over my shoulder talking to her as she ‘texted’ her responses.  Naturally she couldn’t really keep a straight face through all of that.  There were also a handful of Polaroids that they took together as a couple over the past few months.  It was too cute not to photograph, so I got creative and thought it’d be a nice aside, although it didn’t directly fit the narrative. 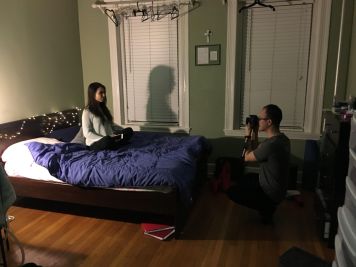 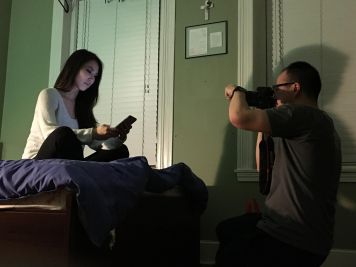 Behind the scenes photos courtesy of Brian

Brian – We finally got around to shooting again one week later.  This sequence was done out of order, where we shot Brian’s outdoor sequence during golden hour/blue hour before going back to his room to capture him on the phone.  The shot of him texting in bed was one that I knew I needed in order to draw a parallel between him and Airi.  The exit shot was also another one I wanted to get — it only took about 8 different passes to get one that worked.

Finale – We took a few action portraits in front of Brian’s apartment and then walked our way down to Commonwealth Ave.  I’m forever grateful that the lights are still up from Christmas time so I had the opportunity to use them for this romantic setting.  And by some stroke of luck, another couple walking their dogs stopped by and asked if we would want to pet/hold one of their dogs.  Those shots were probably the most genuine smiles I was able to capture the entire shoot.

This entire shoot was definitely a learning experience for me, mostly because it was the first time I was trying to tell a story through my photos.  I don’t think I’ll be doing something like this for quite a while, but we’ll see what new ideas I can come up with.  If anything, this entire experience has taught me how to better execute my ideas.

Shameless plug:  Feel free to reach out to me on Instagram or email me if you’re interested in doing a shoot!

Nocturnal ft. @jennny_zzz
Time Flies ft. @andoairi . . I'm by no means a digital artist, but I had so much fun putting this together. Both pictures were taken so long ago - it felt great to breathe new life into them.
Creativity on my Mind
Gemini ft. @pauliitax_94 Have you seen my latest shoot that I did before Christmas? If you scroll to the end, there's a sneak peak for something new coming next week. Link in the bio!
Sunkissed ft. @jilliancheese
Addressing Responsibilities
%d bloggers like this: